The Boys & Girls Clubs of Palm Beach County works to help youth of all backgrounds develop the qualities needed to become responsible citizens and leaders. The Club offers daily access to a broad range of programs in six core areas: character and leadership development; education and career development; health and life skills; the arts; sports and fitness; and technology.

The first Club was housed in what was originally a World War II Officers Club, pool and bathhouse.

The facility was later purchased by the Knights of Columbus until 1969, when a group of civic and community leaders headed by then Palm Beach County Sheriff William Heightman approached the organization about selling it for a Boys Club. After a fundraising effort, the facility was purchased for $40,000 and opened in September, 1971 as the Boys Club of the Palm Beaches.

Over the years, a number of additions were added, including the August H. Oenbrink Memorial Gymnasium and the Charles A. Weber Teen Lounge. While girls were often welcome visitors, it was not until 1989 that the Club officially admitted girls as full members and changed its name to the Boys & Girls Club of West Palm Beach.

Through the years, the neighborhood saw a transformation as less children populated the area and more commercial activities surrounded the Clubhouse. In 2008, Mrs. Marjorie S. Fisher, (hearing the Club was in need of an expansion and renovation), visited the Club and decided that not only was a renovation in order, but a new state-of-the-art facility. Thanks to a generous $2 million donation from Marjorie S, Fisher and the support of other generous donors such as Lesly S. Smith, the former Mayor of Palm Beach, and her daughter Danielle Hickox Moore, the dream of a new Club took shape.

With little outdoor space, the existing location could not accommodate the plans for the new 22,000 square foot facility. Working with the Palm Beach County Commission, 11 acres of county land in a densely populated residential area with numerous schools in the immediate area was acquired. The new facility boasts a number of amenities such as a dance studio, music room, science lab, full gymnasium, teen, junior, and cadet games rooms, cafeteria, computer lab, arts & crafts center and learning center. 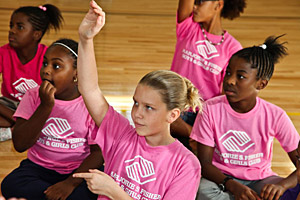 “The Marjorie S. Fisher Boys & Girls Club is the best after-school and summer camp program to send my family. My kids have a blast, and they love playing in the sports leagues!”